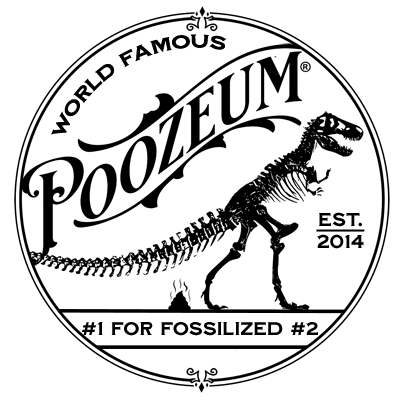 For over 20 years, the Poozeum’s founder, George Frandsen, explored the earth looking for the world’s largest true coprolite (fossilized poop). His goal was to find a specimen larger than the Royal Saskatchewan Museum’s 44 cm by 16 cm (17.3 in by 6.3 in) Tyrannosaurus rex coprolite.  This Canadian turd was recognized as the “world’s largest fossilized excrement from a carnivore” by Guinness World Records in 2017.

George kicked off 2020 by acquiring a massive, freshly discovered, coprolite from  South Dakota, USA. This new specimen is substantially longer than the Canadian coprolite, but has a similar width. This new coprolite specimen was named Barnum and it was added to the Poozeum’s colossal collection of fossilized poop. Shortly after, Guinness World Records certified Barnum as the world’s largest coprolite by a carnivore.

George will now loan this eye-wateringly huge T. rex coprolite to museums around the world, so that people will have the opportunity to see one of the rarest and most thought-provoking fossils on earth.

Want to know more about Barnum the coprolite? Check out the following Q&A

How do you know Barnum the coprolite was made by a Tyrannosaurus rex?

The only Hell Creek Formation carnivore large enough to produce such a large bone-filled poop was T. rex. It was also found in close proximity to where T. rex skeletons have been discovered.

How do you know Barnum is truly a coprolite and not just a rock?
Several methods were used to determine that this specimen is a coprolite rather than a rock. They are:

Why is it named Barnum?
The coprolite is named after Paleontologist, Barnum Brown, who discovered the first Tyrannosaurs rex. Interestingly enough, Barnum Brown was named after P.T. Barnum, the American showman and Barnum & Bailey Circus founder. We believe the name is a fine tribute to both men.

How old is Barnum the coprolite?
It is from the Hell Creek Formation of the Late Cretaceous, which is approximately 70-66.5 million years ago.

Where was Barnum the coprolite found?
It was discovered on a private ranch near Buffalo, Harding County, South Dakota, USA.

Why is Barnum the coprolite still in a plaster jacket?
It remains in the plaster jacket to keep it safe from cracking and damage. The picture above is actually of Barnum’s bottom-side. The rounded top-side is covered by the jacket.

Have more questions, or are  you interested in hosting Barnum at your museum? Drop us a note using our Contact page.